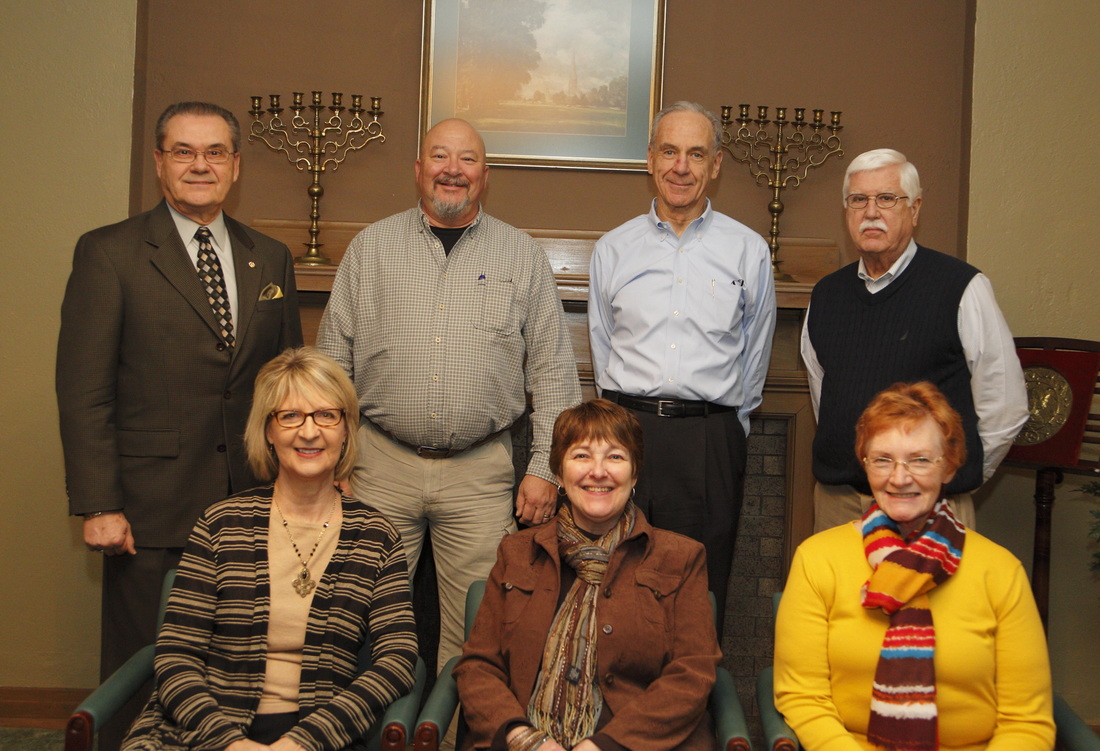 A. DALE HUSTON is currently a banker at Hickory Point Bank. He has worked at the old Illinois National Bank, which became National City Bank when he retired after 32 years. Dale then worked for Geneva Mortgage for 13 years originating commercial real estate mortgages. Dale is married to Judy Huston.  Dale and Judy have a son, Dr. Chad Huston, who is a graduate of the University of Illinois. They also have a daughter, Dana Huston, who is a graduate of Illinois State University. Dale enjoys working on his farm, gardening, and hunting. Besides his service to Westminster, Dale has served on numerous boards. He received his bachelor’s degree from the University of Illinois and has attended numerous banking schools.

CHARLIE KING is an inspector/investigator for the Illinois Environmental Protection Agency, Division of Land Pollution Control, Field Operations Section, Springfield Region.  Charlie is married to Mary Kay Eissler King. His children are David Charles King, Thomas Lee King, Andrew Jacob Mays (stepson), Caitlyn Ann Mays (stepdaughter), Christopher Patrick King, and Rachel Marie King Fox.  Charlie serves as chair of the Adult Education Committee and has served as Moderator of the Board of Deacons. He is a member of the Marine Corps League and American Legion. He is a former Marine Corps boxer and basketball, football, track and field player.  Charlie enjoys writing, reading, sports, cooking, and fishing. He received his bachelor’s and master’s degrees from Illinois State University.

KAREN KRAFT is semi-retired from 50 years as a music/arts Navy contractor (Pearl Harbor, Yorktown NWS, Little Creek NAB) and a chorus teacher in Virginia and Illinois (Norfolk, VA; LaGrange Park, IL; Virginia, IL; Springfield Calvary Academy). She continues to sub in District 186 and Williamsville. She also teaches private piano lessons. Karen has four children. Jodi Jo Aime is a mtg. banker and graduate of George Mason University. Vincent Petty is a blacksmith-interpreter at Jamestown, VA and a graduate of William and Mary University. Jason Petty is an industrial psychologist and a graduate of Old Dominion University. Meaghan Thomas is a rebel and the mother of a perfect child. Along with her service to Westminster, Karen is a past board president of Phoenix Power and Light (non-profit, Odenton, MD). She enjoys making and designing jewelry, needlework, reviewing films and books, and teaching piano and voice. She is also a PEO (Philanthropic Education Organization) member. Karen is a music education graduate from Western Illinois University. She is continuing education at ODU, Shenandoah University, Regent University, and East Straudsburg University (PA).

KEN MOREY retired in 2015 after 37 years in the insurance and financial planning business. He is also a retired Artillery Officer from the United States Marine Corps Reserves after 30 years.  Ken is married to Bev Morey. They have three daughters, Kara Savage, Shannon Crouch, and Megan Morey. Kara attended Eastern Illinois University and is a first grade teacher. Shannon also attended Eastern Illinois University and is an accountant. Megan attended the University of Central Florida and is a stay-at-home mom.  Along with his service to Westminster, Ken is a Past Potentate of Ansar Shrine and a 33rd Scottish Rite Mason. Ken received his bachelor’s degree in marketing from Southern Illinois University in Carbondale, IL. He received his master’s degree in human development from Governor’s State University in Park Forest, IL. He holds 3 professional financial planning designations.

GEORGE PRECKWINKLE is president of the local Ace Hardware stores in central Illinois.  George is married to Lynda Preckwinkle. He has two goddaughters, Ashley and Ally Olson. Along with his service to Westminster, George is active on the Abraham Lincoln Boy Scouts of America Board (and past president) and is a member of the Sangamon County Board and Blackburn College Board of Trustees. In the past, he was a United Way campaign chair, YMCA president, a founding member and past president of Local First Springfield, chair of the Memorial Medical Center Foundation, and has been involved in many professional/industrial organizations. George enjoys sailing and motor boating, traveling, and gardening. He is an aspiring oenophile and enjoys family time. George received his B.B.A degree from Southern Methodist University, J.D. from Southern Methodist University and is a member of the Illinois State Bar Association.

JEANNE VANGIESON is a licensing representative at the Illinois Department of Children and Family Services. Jeanne is married to Peter VanGieson.  They have two daughters, Shelby VanGieson and Kelsey Baier.  Jeanne is a member of the Westminster Choir and she enjoys cooking and traveling.  She attended Purdue University in West Lafayette, IN.